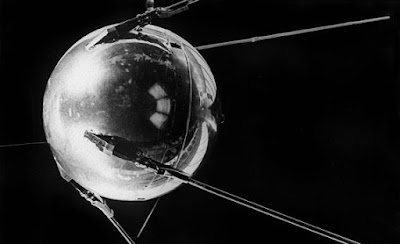 Sputnik 1 was the first artificial Earth satellite. The Soviet Union launched it into an elliptical low Earth orbit on 4 October 1957. It was a 58 cm (23 in) diameter polished metal sphere, with four external radio antennae to broadcast radio pulses. It was visible all around the Earth and its radio pulses were detectable.
First Satellite in Space
Posted by Oberon at 2:33 PM