My Canada has Trudeau as Prime Minister 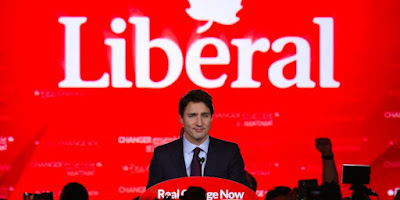 Good guys win a huge historic massive victory against overwhelming odds, destroying forces of real evil and entitlement. I am so proud to be a Canadian this morning. We rejected the advice of our media masters, the pundits, the pitiful wretches who wage a war paid to not know what they know.

I liked Trudeau but have to admit I thought Harper was going to wipe the floor with him. Nuanced messaging works for me but when Trudeau was crucified for thoughtful statements about China and other complex issues, I thought he had little chance. Harper's scorched earth campaign was probably the biggest factor in the Liberal win. However the Trudeau team ran a remarkable campaign. Lots of meaty policy Canadians in the end found appetising. Sticking to the sunny ways, throwing all the dark arts under the bus and just going for it Canadian style.


Three big things that have me ecstatic.1) Legal Pot: the stupidity of prohibition abandoned. This will add billions of dollars to the public purse. It will subtract billions of dollars from the public expense. It will make society much more productive because thousands of Canadian will no longer have a criminal record for getting an illegal smile.

2) Infrastructure spending: This will create jobs and make our nation more productive. Comparing Canada to northern Europe, Austria, Switzerland, Taiwan and Singapore its very clear the potential of Canada has barely been scratched. The common thread through all those successful economies is fantastic infrastructure and government shaping the economy.

3) The F35 dies: Canada doges the biggest flying rattrap ever. I wonder if the plain brown envelopes can also be recalled.

Canada has a exaggerated sense of its importance on the world stage. Its part of our mythology. Harper destroyed our international brand. Fortunately Canada is so insignificant the world hardly noticed. I look forward to sewing the flag back on the backpack.

Sunny ways my friends, sunny day in Canada.
Posted by Steve at 8:22 AM