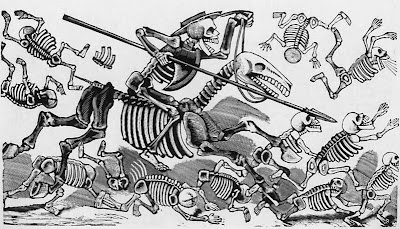 José Guadalupe Posada (February 2, 1852 – January 20, 1913) was a Mexican cartoonist illustrator and artist whose work has influenced many Latin American artists and cartoonists because of its satirical acuteness and political engagement.

Posada's best known works are his calaveras, which often assume various costumes, such as the Calavera de la Catrina, the "Calavera of the Female Dandy", which was meant to satirize the life of the upper classes during the reign of Porfirio Díaz. Most of his imagery was meant to make a religious or satirical point. Since his death, however, his images have become associated with the Mexican holiday Día de los Muertos, the "Day of the Dead".

Largely forgotten by the end of his life, Posada's engravings were brought to a wider audience in the 1920s by the French artist Jean Charlot, who encountered them while visiting Diego Rivera. While Posada died in poverty, his images are well known today as examples of folk art. The muralist José Clemente Orozco knew Posada when he was young, and credited Posada's work as an influence on his own. (read more)
Posted by Oberon at 6:36 PM