Godzilla (ゴジラ, Gojira?) is a daikaijū, a Japanese movie monster, first appearing in Ishirō Honda's 1954 film Godzilla. With the bombings of Hiroshima and Nagasaki still fresh in the Japanese consciousness, Godzilla was conceived as a monster created by nuclear detonations and a metaphor for nuclear weapons in general.

Although his origins vary somewhat from film to film, he is always described as a prehistoric creature, who first appeared and attacked Japan at the beginning of the Atomic Age. In particular, mutation due to atomic radiation is presented as an explanation for his size and powers. The most notable of Godzilla's resulting abilities is his atomic breath: a powerful heat ray of fire from his mouth.

Godzilla is one of the most recognizable symbols of Japanese popular culture worldwide and remains an important facet of Japanese films, embodying the kaiju subset of the tokusatsu genre. He has been considered a filmographic metaphor for the United States, as well as an allegory of nuclear weapons in general. The earlier Godzilla films, especially the original, portrayed Godzilla as a frightening, nuclear monster. Godzilla represented the fears that many Japanese held about the nuclear attacks on Hiroshima and Nagasaki, and the possibility of recurrence. (read more) 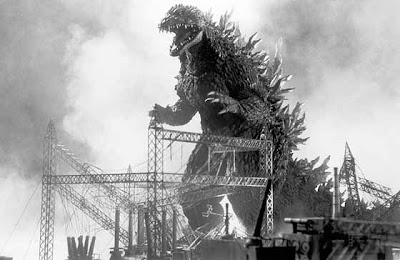