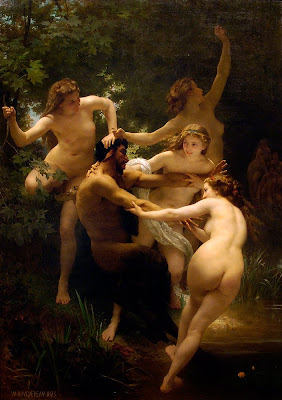 Nymphs and Satyr (Nymphes et Satires) is a painting, oil on canvas, created by artist William-Adolphe Bouguereau in 1873.

Nymphs and Satyr was exhibited in Paris in 1873, a year before the Impressionists mounted their first exhibition, in a style radically different from that of Bouguereau.

Sterling Clark discovered the painting near the end of the 19th century, displayed in the bar of the Hoffman House Hotel, New York City. Clark rediscovered the piece in storage at the Hoffman during the 1930s, acquiring the piece in 1943. The piece is currently on display at the Clark Art Institute located in Williamstown, Massachusetts.

Set in a secluded pond, the painting depicts a cluster of bathing nymphs who have captured a lascivious satyr spying on them; four are tugging him toward a dunking, and one of them is using only one hand, the other beckoning other nymphs, in the background, to join the fun.