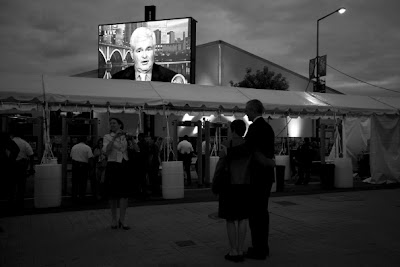 Where would he begin? “Most of these schools ought to get rid of the unionized janitors,” the former House speaker said, “have one master janitor and pay local students to take care of the school.” Liberals have criticized that idea for insulting janitors and reinstating child exploitation.

One can challenge the factuality of Gingrich’s premise that “really poor children in really poor neighborhoods have no habits of working and have nobody around them who works” and disfavor employment “unless it’s illegal.” Three-fourths of America’s poor work. Given the critical lack of jobs in inner cities and isolated rural areas, it’s difficult to argue that the real problem is poor people’s —or their children’s — lassitude or penchant for crime. (politico.com)

U.S. Republican presidential candidate Newt Gingrich thrust himself into controversy on Friday by declaring that the Palestinians are an "invented" people who want to destroy Israel.

The former speaker of the U.S. House of Representatives predictably sided with Israel in its decades-old dispute with the Palestinians but took it a step further in an interview with the Jewish Channel.

Gingrich differed with official U.S. policy that respects the Palestinians as a people deserving of their own state based on negotiations with Israel.

"Remember, there was no Palestine as a state. It was part of the Ottoman Empire" until the early 20th century, Gingrich said.

"I think that we've had an invented Palestinian people who are in fact Arabs, and who were historically part of the Arab community. And they had a chance to go many places, and for a variety of political reasons we have sustained this war against Israel now since the 1940s, and it's tragic," he said.

Gingrich said he would be willing to consider granting clemency to Jonathan Jay Pollard, who has been serving a life prison term since 1987 for passing U.S. secrets to Israel. Successive U.S. presidents have refused Israeli entreaties to free him. (haaretz.com)

I really hope he runs on the Republican side. It will be so easy to take this white-trash apart.