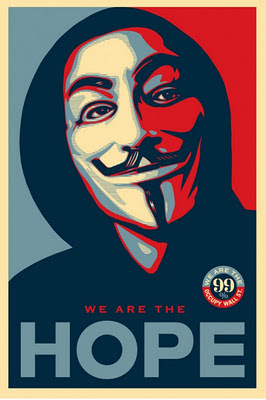 : Here at OBEY, we are always in support of a grassroots effort to change the world for the better. These FREE downloadable posters are promotional materials to help support the Occupy Wall Street Movement. Click the link below, download the posters and make your voice be heard! For more information on the Occupy Movement, please visit www.occupytogether.org. 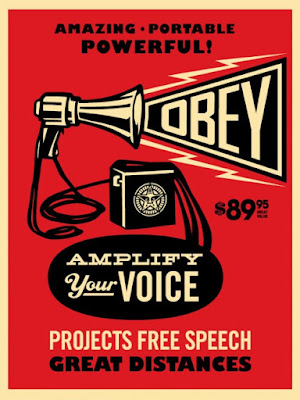 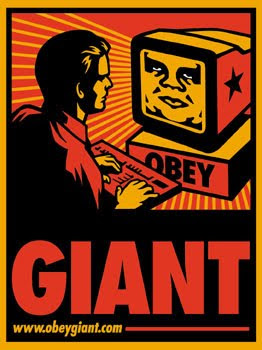 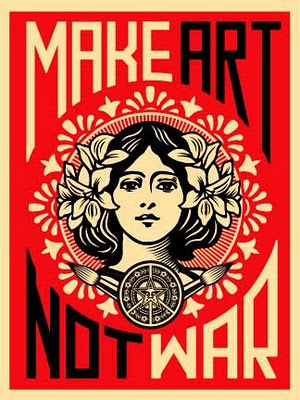 The OBEY sticker campaign can be explained as an experiment in Phenomenology. Heidegger describes Phenomenology as “the process of letting things manifest themselves.” Phenomenology attempts to enable people to see clearly something that is right before their eyes but obscured; things that are so taken for granted that they are muted by abstract observation.

The FIRST AIM OF PHENOMENOLOGY is to reawaken a sense of wonder about one’s environment. The OBEY sticker attempts to stimulate curiosity and bring people to question both the sticker and their relationship with their surroundings. Because people are not used to seeing advertisements or propaganda for which the product or motive is not obvious, frequent and novel encounters with the sticker provoke thought and possible frustration, nevertheless revitalizing the viewer’s perception and attention to detail. The sticker has no meaning but exists only to cause people to react, to contemplate and search for meaning in the sticker. Because OBEY has no actual meaning, the various reactions and interpretations of those who view it reflect their personality and the nature of their sensibilities.

Many people who are familiar with the sticker find the image itself amusing, recognizing it as nonsensical, and are able to derive straightforward visual pleasure without burdening themselves with an explanation. The PARANOID OR CONSERVATIVE VIEWER however may be confused by the sticker’s persistent presence and condemn it as an underground cult with subversive intentions. Many stickers have been peeled down by people who were annoyed by them, considering them an eye sore and an act of petty vandalism, which is ironic considering the number of commercial graphic images everyone in American society is assaulted with daily.

Another phenomenon the sticker has brought to light is the trendy and CONSPICUOUSLY CONSUMPTIVE nature of many members of society. For those who have been surrounded by the sticker, its familiarity and cultural resonance is comforting and owning a sticker provides a souvenir or keepsake, a memento. People have often demanded the sticker merely because they have seen it everywhere and possessing a sticker provides a sense of belonging. The Giant sticker seems mostly to be embraced by those who are (or at least want to seem to be) rebellious. Even though these people may not know the meaning of the sticker, they enjoy its slightly disruptive underground quality and wish to contribute to the furthering of its humorous and absurd presence which seems to somehow be antiestablishment/societal convention. Giant stickers are both embraced and rejected, the reason behind which, upon examination reflects the psyche of the viewer. Whether the reaction be positive or negative, the stickers existence is worthy as long as it causes people to consider the details and meanings of their surroundings. In the name of fun and observation.