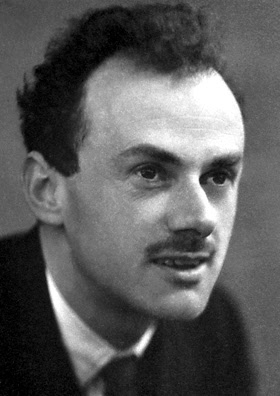 Paul Adrien Maurice Dirac, OM, FRS (8 August 1902 – 20 October 1984) was an English theoretical physicist who made fundamental contributions to the early development of both quantum mechanics and quantum electrodynamics. He held the Lucasian Chair of Mathematics at the University of Cambridge and spent the last fourteen years of his life at Florida State University.

Among other discoveries, he formulated the Dirac equation, which describes the behaviour of fermions, and predicted the existence of antimatter.

Dirac shared the Nobel Prize in physics for 1933 with Erwin Schrödinger, "for the discovery of new productive forms of atomic theory."

Dirac is widely regarded as one of the world's greatest physicists. He was one of the founders of quantum mechanics and quantum electrodynamics.

His early contributions include the modern operator calculus for quantum mechanics, which he called transformation theory, and an early version of the path integral. He formulated a many-body formalism for quantum mechanics which allowed each particle to have its own proper time.

His relativistic wave equation for the electron was the first successful attack on the problem of relativistic quantum mechanics. Dirac founded quantum field theory with his reinterpretation of the Dirac equation as a many-body equation, which predicted the existence of antimatter and matter–antimatter annihilation. He was the first to formulate quantum electrodynamics, although he could not calculate arbitrary quantities because the short distance limit requires renormalization. (read more)
Posted by Oberon at 10:32 AM

Richard P. Feynman was the closest American at his genius level.
http://en.wikipedia.org/wiki/Richard_P._Feynman