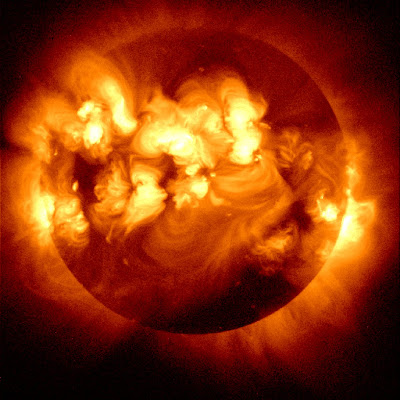 The most powerful flare ever observed was the first one to be observed, on September 1, 1859, and was reported by British astronomer Richard Carrington and independently by an independent observer named Richard Hodgson. The event is named the Solar storm of 1859, or the "Carrington event". The flare was visible to a naked-eye (in white light), and produced stunning auroras down to tropical latitudes such as Cuba or Hawaii. The flare left a trace in Greenland ice in the form of nitrates and beryllium-10, which allow its strength to be measured today (New Scientist, 2005). Cliver & Salvgaard (2004) reconstructed the effects of this flare and compared with other events of the last 150 years. In their words: While the 1859 event has close rivals or superiors in each of the above categories of space weather activity, it is the only documented event of the last 150 years that appears at or near the top of all of the lists.


On September 1–2, 1859, the largest recorded geomagnetic storm occurred. Aurorae were seen around the world, most notably over the Caribbean; also noteworthy were those over the Rocky Mountains that were so bright that their glow awoke gold miners, who began preparing breakfast because they thought it was morning. Telegraph systems all over Europe and North America failed in some cases even shocking telegraph operators. Telegraph pylons threw sparks and telegraph paper spontaneously caught fire. Some telegraph systems appeared to continue to send and receive messages despite having been disconnected from their power supplies.

The last solar maximum was in 2000. The next solar maximum is currently predicted to occur sometime between January and May 2013 and to be one of the weakest cycles since 1928. The unreliability of solar maxima is demonstrated in that NASA had previously predicted the solar maximum for 2010/2011 and possibly to occur as late as 2012. Previously, on March 10, 2006, NASA researchers had announced that the next solar maximum would be the strongest since the historic maximum in 1859 in which the northern lights could be seen as far south as Rome, approximately 42° north of the equator. (read more)

The next solar max could be powerful enough to knock out electric power grids around the world for months or even longer.
(space storm)
Posted by Oberon at 12:34 AM