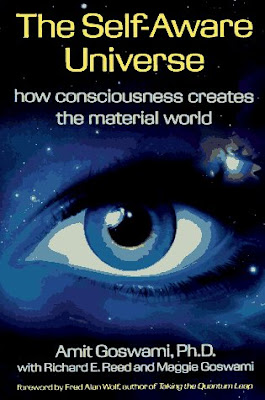 Amit Goswami is a theoretical nuclear physicist and member of The University of Oregon Institute for Theoretical Physics since 1968, teaching physics for 32 years. After a period of distress and frustration in his private and professional life starting at the age 38, his research interests shifted to quantum cosmology, quantum measurement theory, and applications of quantum mechanics to the mind-body problem. He became best known as one of the interviewed scientists featured in the 2004 film What the Bleep Do We Know!?. Goswami is also featured in the recent documentary about the Dalai Lama entitled Dalai Lama Renaissance, and stars in the newly released documentary "The Quantum Activist"

In the late 1980s Goswami developed an idealist interpretation of quantum mechanics, inspired in part by philosophical ideas drawn from Advaita Vedanta and theosophy. Calling his theory "monistic idealism", he claims it is not only "the basis of all religions worldwide" but also the correct philosophy for modern science. In contrast to materialistic conventional science, he claims that universal consciousness, not matter, is the ground of all existence, in congruence with mystic sages. Consciousness, deemed as the precursor of physicality, arises from conscious observation through a process intimately connected to wavefunction collapse in a quantum measurement. Once the assumption that there is an objective reality independent of consciousness is put aside, the paradoxes of quantum physics are explainable, according to Goswami.

As a pioneer of a self-styled multidisciplinary scientific paradigm, he refers to himself as a "quantum activist" engaging in research on the "Science within consciousness", which comprises and explains the "downward causation" and the upwards drift in the fields of physics, biology, and psychology and more recently the healing arts, thus resulting in varied theories of integral medicine based on five interchanging levels of existence: the physical, the vital, the mental, the supra-mental intellect and the limitless bliss state. (read more)
Posted by Oberon at 10:21 AM

..and I like this guy ..! definitely puts my notion of cosmic memory in a larger context. Thanks for the insight, Kerry.