this has to stop 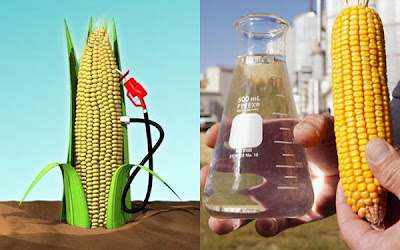 December brings the biggest showdown with Illinois' and possibly the nation's most gluttonous corporate freeloader: the corn ethanol industry.

Symbolically, the upcoming battle of budget hawks against ethanol's special pleaders is as significant as the fight over continuing the Bush tax cuts.

At issue is whether Congress will allow corpulent ethanol subsidies and a tariff against some imported ethanol to expire on Dec. 31. The ethanol industry has been tromping around Washington like starving bears, hoping to get the deal done during this lame-duck session of Congress, before budget-cutting hunters arrive in the next Congress.

Ethanol's supporters assert that it is an environmentally friendly, renewable and cost-effective gasoline additive. Its opponents dispute it on every point, arguing, among other things, that ethanol costs more than gasoline to make, raises food prices, increases tailpipe pollution and encourages cultivation of fragile lands. But dare to question ethanol, which consumes 41 percent of the corn crop, and snowstorms of studies are produced, from both sides. Clearly, the science supporting ethanol is "unsettled." Which makes spending billions of taxpayers' and consumers' dollars on ethanol at best a costly crapshoot.

Despite that, the Environmental Protection Agency recently decided that we aren't consuming enough of it. Instead of mandating that 10 percent of gasoline sold at the pump be ethanol, as has been required for years, the EPA issued its so-called E15 rule, which raised to 15 percent the allowable blend of ethanol for cars and certain trucks built since 2007. In that, the EPA ignored studies pointing to the harmful effects that 50 percent increase will have on cars, including the agency's own conclusion that it would damage the catalytic converters of tens of millions of cars now on the road.

Wait, that's only the start. The ethanol industry also receives a tax credit amounting to 45 cents a gallon and is aided by a tariff on sugar-cane ethanol valued at 54 cents. In addition, the 2007 energy act mandates the use of renewable fuels, including ethanol: 10.5 billion gallons in 2009, 14 billion in 2011 and 36 billion by 2022.

This is extraordinary. And insane. Here, the government creates a fake market for ethanol, then subsidizes the market, and then protects the market against foreign competition.

This has to stop. But don't count on it.

Agribusiness is an American biggie, especially in Illinois, loaded as we are with ethanol giant Archer Daniels Midland Co., commodities markets, corn farmers and countless refiners, processors, haulers and investors. Their people sit on important corporate boards and their campaign contributions flow into Congress and state legislatures. Even cost-cutters will pretend not to notice the need to carve away at this turkey, one of the most heavily subsidized businesses in America. And, I haven't even mentioned the tens of billions of federal dollars that go for crop subsidies and other boons for wheat, cotton, sugar, peanuts, dairy, wool and other types of farmers.

Critics of these subsidies get it from the right and the left. But opposing the subsidies is a growing coalition from the right and left. Among them are the Natural Resources Defense Council, Environmental Working Group, Small Business and Entrepreneurship Council, National Petrochemical and Refiners Association, International Dairy Foods Association and Grocery Manufacturers Association. As their Web site (followthescience.org) illustrates, they are united in their opposition to the EPA's E15 rule for a variety of environmental and economic reasons, including, no doubt, their own self-interest. The coalition earlier this month filed a federal lawsuit charging that the EPA exceeded its statutory powers by issuing the rule. (chicagotribune.com)

farming is much different in the US than here so we don't seem to have this problem.

When I was learning Bee Keeping I was amazed to find how differently you farm than we do.

The California Almond crop, for example could not be fertilised without the transportation of millions of bees.

I do know that our Queen (who owns large areas of Virginia) is the recipient of large amounts of US tax payers money so she can grow cotton!