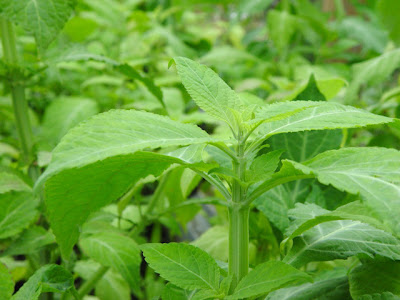 Salvia divinorum (also known as Diviner's Sage, Ska María Pastora, Seer's Sage, and by its genus name Salvia) is a psychoactive plant which can induce dissociative effects and is a potent producer of "visions" and other hallucinatory experiences.

Salvia divinorum has a long and continuous tradition of religious use by Mazatec shamans, who use it to facilitate visionary states of consciousness during spiritual healing sessions. Most of the plant's local common names allude to the Mazatec belief that the plant is an incarnation of the Virgin Mary, with its ritual use also invoking that relationship. Its active psychoactive constituent is a structurally unique diterpenoid called salvinorin A, a potent κ-opioid and D2 receptor agonist. Salvia divinorum is generally understood to be of low toxicity (high LD50) and low addictive potential; as a κ-opioid agonist.

The Salvia divinorum User's Guide says that while the effects of salvia are generally quite different from those of alcohol, like alcohol, it impairs coordination. It also emphasizes that salvia is not a 'party drug.'

Salvia is not 'fun' in the way that alcohol or cannabis can be. If you try to party with salvia you probably will not have a good experience. Salvia is a consciousness-changing herb that can be used in a vision quest, or in a healing ritual. In the right setting, salvia makes it possible to see visions. It is an herb with a long tradition of sacred use. It is useful for deep meditation. It is best taken in a quiet, nearly dark room; either alone, or with one or two good friends present.
—Salvia divinorum User's Guide
(read more)
Posted by Oberon at 10:01 AM

Well said, Kerry. Something along the lines of an Indian peyote ceremony would provide a better experience with Salvia ~~>[my experience] ..for what it’s worth

......I did Salvia Divinorum..about four years ago...we smoked it, there was a large group of us but we went with a "safe person" and did our trip.

Mine was very very bad, the only thing I can say is that I was at the gates of hell, women and children were laughing and coming that way and I had to stop them......

Interesting ..although I haven't tried Salvia Divinorum, it sounds a lot like experiences I've heard about with jimson weed (Datura stramonium.