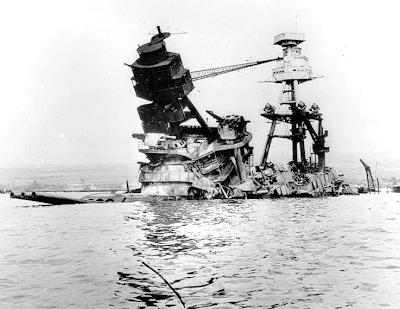 USS Arizona (BB-39) was a Pennsylvania-class battleship of the United States Navy and the first to be named "Arizona". On March 4, 1913, Congress authorized the construction of Arizona, named to honor the 48th state's admission into the union on 14 February 1912. The ship was the second and last of the Pennsylvania class of "super-dreadnought" battleships.

She is most remembered because of her sinking, with the loss of 1,177 lives, during the Japanese attack on Pearl Harbor on 7 December 1941, the event that goaded the US into World War II. Unlike most of the other ships sunk or damaged that day, the Arizona could not be salvaged, although the U.S. Navy removed several elements of the ship that were reused. The wreck still lies at the bottom of Pearl Harbor and was established as a memorial to all those who died during the Pearl Harbor attack. (read more)
Posted by Oberon at 5:01 PM

US Citizens, notably Prescott Bush, amongst others were profiteering from the Nazi war machine.....

I realise this may not be what you want to believe, or be palatable to US citizens.

After the war many Nazis were evacuated from Germany in operation "Paperclip" and went on to work setting up NASA.................

....the Nazis did not loose the second world war, they simply relocated and regrouped....

They continued their eugenics and torture programmes, torture is used in the MKULTRA programme....

The cold war and the partition of Germany were distractions, they dumbed down the American people, through "Education", diet and propaganda.....

They engaged in illegal, immoral wars and conflicts, constantly, establishing "American" military bases through out the world.....

They took control of the banks and stock exchange and committed the crimes of insider trading and usury to bring the world to it's financial knees....

They have control of the money, the food, the military, they pollute the air we breathe......

They have built 600 concentration camps on American soil, they have train carriages built, complete with shackles......and hundreds of thousands of black plastic coffins, neatly stacked...

Any American who speaks out is flagged, (red or black) people are being encouraged to speak out against others in the name of "homeland security".....

The country is being isolated by the TSA body scanner outrage.....

There are two nuclear warheads, built by the Israeli's in South Africa "missing"...........