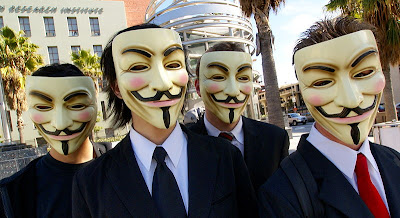 Anonymous (used as a mass noun) is a term used in two senses. As an Internet meme it represents the concept of many online community users, or the online community itself, acting anonymously in a coordinated manner, usually toward a loosely self-agreed goal. It is also a label adopted by specific loose groups of people who undertake protests and other actions under the title "Anonymous," which derives from the same meme. It is generally considered to be a blanket term for members of certain Internet subcultures.

Actions credited to "Anonymous" are undertaken by unidentified individuals who apply the Anonymous label to themselves as attribution. After a series of controversial, widely-publicized protests and reprisal DDoS attacks by Anonymous in 2008, incidents linked to its cadre members are said to be increasingly common.

Although not necessarily tied to a single online entity, many websites are strongly associated with Anonymous. This includes notable imageboards such as 4chan and Futaba, their associated wikis, Encyclopædia Dramatica, and a number of forums.

Anonymous broadly represents the concept of any and all people as an unnamed collective. Definitions tend to emphasize the fact that the term cannot be readily encompassed by a simple definition, and instead it is often defined by aphorisms describing perceived qualities.

"Anonymous is the first internet-based superconsciousness. Anonymous is a group, in the sense that a flock of birds is a group. How do you know they're a group? Because they're travelling in the same direction. At any given moment, more birds could join, leave, peel off in another direction entirely."

In late 2010, the whistle-blowing website WikiLeaks came under intense pressure to stop publishing secret United States diplomatic cables. In response, Anonymous announced its support for WikiLeaks. Operation Payback changed its focus to support WikiLeaks and launched DDoS attacks against PayPal, MasterCard, Visa and the Swiss bank PostFinance, in retaliation for perceived anti-WikiLeaks behavior under the codename of Operation Avenge Assange. Due to the attacks, both MasterCard and Visa's websites were brought down on December 8th. A threat researcher at PandaLabs said Anonymous also launched an attack which brought down the Swedish prosecutor's website when WikiLeaks founder Julian Assange was arrested in London and refused bail in relation to extradition to Sweden. (read more) (video clip)
Posted by Oberon at 6:54 PM

Good old Wikipeadia ~ making it up as we go along!

Anonymice have always been a feature of the internet, they used to be called "Trolls" a term I have always found as being offensive to Trolls.

I suppose some of their activities may be useful, hoever I feel we should use critical thinking as to whether anonymous people are really who they say they are and, indeed how easily a group such as this could be infiltrated, in that if no one knows who anyone is ~ well they could be anybody couldn't they?

...no one knows who anyone is and that's the beauty of it.

We are NONE of us anonymous! Your computer and what you say is trackable by me, for goodness sake! So the government/police/military complex know it ALL.

It may interest you to know that GUY FAWKES was a PATSY ......there was NEVER gunpowder under the houses of Parliament.....

The whole thing was just so the government of the day could oppress Catholics............