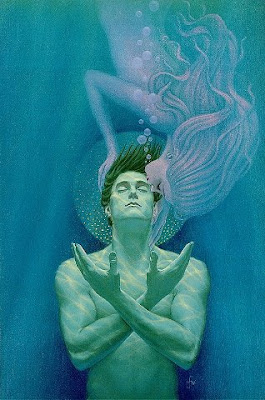 Stranger in a Strange Land is a best-selling 1961 Hugo Award-winning science fiction novel by Robert A. Heinlein. It tells the story of Valentine Michael Smith, a human raised by Martians on the planet Mars, after his return to Earth in early adulthood. The novel explores his interaction with—and the eventual transformation of—Earth culture. The novel's title refers to the Biblical Book of Exodus. According to Heinlein in Grumbles from the Grave, the novel's working title was The Heretic. Several later editions of the book have promoted it as "The most famous Science Fiction Novel ever written."

When Heinlein first wrote Stranger in a Strange Land, his editors at Putnam required him to drastically cut its original 220,000-word length, and to remove some scenes that might have been considered too shocking at the time. The resulting edited version was, according to Heinlein, 160,067 words. (He joked about sending in the last 67 to the publisher on a postcard.) In 1962, this version received the Hugo Award for the Best Science Fiction Novel of the Year. After Heinlein's death in 1988, his wife Virginia arranged to have the original uncut version of the manuscript published in 1991 by Ace/Putnam. Critics disagree over whether Heinlein's preferred original manuscript is in fact better than the heavily-edited version originally published. There is similar contention over the two versions of Heinlein's Podkayne of Mars.

While initially a success among science fiction readers, over the following six years word-of-mouth caused sales to build, requiring numerous subsequent printings of the first Putnam edition. The novel has never been out of print. Eventually Stranger in a Strange Land became a cult classic, attracting many readers who would not ordinarily read a work of science fiction. The late-1960s counterculture, popularized by the hippie movement, was influenced by its themes of individual liberty, self-responsibility, sexual freedom, and the influence of organized religion on human culture and government, and adopted the book as something of a manifesto.

In 1968, Tim Zell (now Oberon Zell-Ravenheart) and others formed a neo-pagan religious organization called the Church of All Worlds, modeled after the religion founded by the primary characters in the novel. Except for correspondence with Zell (a lengthy letter to Zell appears as a letter to "a Fan" toward the end of the book in Grumbles from the Grave) and a paid subscription to the Church's Green Egg magazine during the 1970s (as Heinlein refused to accept a complimentary subscription), Heinlein had no other connection to the project.

Stranger was written in part as a deliberate attempt to challenge social mores. In the course of the story, Heinlein uses Smith's open-mindedness to reevaluate such institutions as religion, money, monogamy, and the fear of death. Heinlein completed writing it ten years after he had (uncharacteristically) plotted it out in detail. He later wrote, "I had been in no hurry to finish it, as that story could not be published commercially until the public mores changed. I could see them changing and it turned out that I had timed it right."
(read more)
Posted by Oberon at 8:08 AM

but after some thought I have relegated both Heinlein & Houellebecq to the 'unresolved internal psychology' category :-)