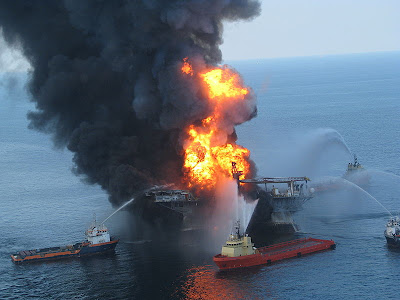 Survivors described the incident as a sudden explosion which gave them less than five minutes to escape as the alarm went off. After having been on fire for more than a day, Deepwater Horizon sank on April 22, 2010 in 5,000 feet of water. 115 of the 126 member crew were recovered, and eleven remain missing.

Although initially the undersea wellhead appeared to be contained, on 24 April it was found that the wellhead was damaged and was leaking oil into the Gulf. Coast Guard Rear Admiral Mary Landry described it as "a very serious spill, absolutely." BP plans to use remotely operated vehicles (ROVs) to close the well at depth; up to 19,000 barrels of oil a day is estimated to be leaking from the wellhead. The valve closing procedure was estimated to take 24 to 36 hours as of April 25; oil cleanup was being hampered by high waves on April 24 and 25. By April 25, the oil spill covered 1500 square km, and was only 50 km from the Chandeleur Islands, ecologically sensitive barrier islands already damaged by Hurricane Katrina. (read more)
Posted by Oberon at 9:11 AM