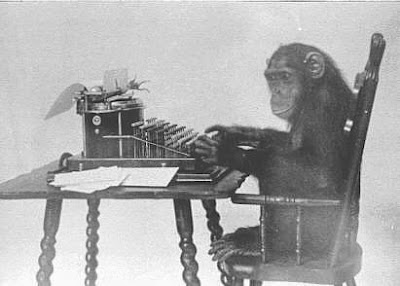 The infinite monkey theorem states that a monkey hitting keys at random on a typewriter keyboard for an infinite amount of time will almost surely type a given text, such as the complete works of William Shakespeare.

In this context, "almost surely" is a mathematical term with a precise meaning, and the "monkey" is not an actual monkey, but a metaphor for an abstract device that produces a random sequence of letters ad infinitum. The theorem illustrates the perils of reasoning about infinity by imagining a vast but finite number, and vice versa. The probability of a monkey exactly typing a complete work such as Shakespeare's Hamlet is so tiny that the chance of it occurring during a period of time of the order of the age of the universe is minuscule, but not zero. (read more)
Posted by Oberon at 1:23 PM

Borges (Jorge Luís) has a short story about this...
and it's an amazing kind of thinking and a great metaphoric aproach on randomness, universe, "creation", etc...