The Seven Deadly Sins and The Seven Virtues 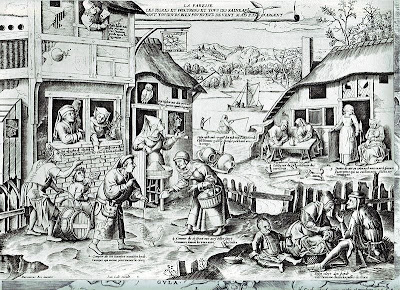 Whether one is religious or not, there is much symbolic power in the concepts and language used by the Church (indeed a plurality of churches as splits inevitably developed to cater for divergent views.) For the present writer, religious language is purely metaphor. For him the Bible is a superb compendium of stories rich in metaphor and indeed meaning. He has long left behind any trace at all of literalism in religious or biblical matters. However, he still respects all religions and those that espouse them provided they do not seek to thrust their views down the throats of others or indeed harm others by following misguided beliefs.

There is not a little psychology in the Scriptures and in the traditional teaching promulgated and promoted by the various churches and organised religions. Whether one is religious or not, one can access this wisdom through looking at and contemplating what religious categories sought to represent metaphorically. To cut to the chase here, the category of sins called The Seven Deadly Sins represents a deep insight into human psychology. Even if you are not convinced that such a concept as sin exists you could recast them as The Seven Deadly Desires. For me they represent a deep insight into human psychology.

One of my favourite contemporary philosophers is John Gray who quite simply believes that we overestimated the importance of humankind's place in the universe or in the scheme of things. He prefers to call us "human animals" rather than "human beings" as he feels this latter term is loaded with presuppositions and indeed prejudices. Of course, we are a special kind of animal - a human animal, but an animal nonetheless. We are heir to many animal instincts and desires. These for the erudite Sigmund Freud, the founder of Psychoanalysis, make up that part of the human psyche which he referred to as the "Id" which for him was literally a cesspit of desires.

Where, you may ask, is this post going? What is it getting at? Well, it is my contention that the present world economic crisis is been caused by the deadly desires of the human animals that live upon this little blue planet in the middle of the frightening infinity of space. Let me list the the seven for you, though I am sure you are really very well acquainted with them. They are: Lust, Gluttony, Greed, Sloth, Wrath, Envy and Pride. These, you will agree, are deadly desires when they take hold of us. Lust, Gluttony, Greed and Sloth are sins or desires of excess. We literally want to possess everything - we cannot get enough of anything. The Eastern religions see this as a clinging onto things and to people - all of which belongs to the world of impermanence anyway. An international Irish politician, Mr Pat Cox, a former president of the European Parliament has stated rather wisely that what caused the present international global monetary crisis was "the tsunami of greed that gripped the western world." How right he is and how perspicacious of him. Yes, we poor human animals, often at the mercy of our desires do succumb to lust - for power, for wealth, for boundless happiness, whether sexual or otherwise. We do like to glut ourselves in the best of restaurants. We do like to do things to excess. To that extent we become possessed by our possessions and overwhelmed by our passions - if not virtually smothered by them.

Then, envy and pride are rather pitiful and base desires. It is surely a sign of a considerable lack of self-esteem that pushes us to envy the achievements of others. Then, the old saying that "pride precedes a fall" is ever so true. I am reminded here of the famous Biblical story of the Tower of Babel - a wonderful and wondrous allegory full of metaphorical delight. The early human animal was so besotted with his own prowess that he sought to build the greatest and highest tower ever - one that would reach to the very heavens but alas and alack its destiny was that of destruction. I remember a lecturer calling this the "hubris" of humankind. Hubris is the Greek word for pride.

However, the Church (or churches) did have a balance to this teaching. For each of the Seven Deadly Sins there were, of course, The Seven Virtues which were the cure or antidote, to use a medical metaphor, to each of the evil desires listed above: Chastity, Temperance, Charity, Diligence, Patience, Kindness and Humility. The religious virtues can, of course, be recast as positive human behaviours capable of being executed by the Ego under the influence of the Superego (Conscience) to put this religious language in Freudian terms.

...thank you for this post...i was going to do a post on just this subject but hadn't got to it...you did it justice.

Thanks, Oberon, I appreciate your comment! Keep up the good work, my friend!