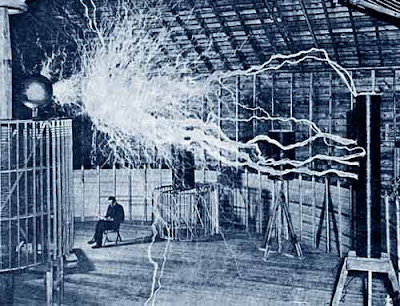 Nikola Tesla (10 July 1856 – 7 January 1943) was an inventor and a mechanical and electrical engineer. Tesla was born in the village of Smiljan near the town of Gospić, Austrian Empire, Croatian Krajina. He was an ethnic Serb subject of the Austrian Empire and later became an American citizen. Tesla is often described as an important scientist and inventor of the modern age, a man who "shed light over the face of Earth". He is best known for many revolutionary contributions in the field of electricity and magnetism in the late 19th and early 20th centuries. Tesla's patents and theoretical work formed the basis of modern alternating current electric power (AC) systems, including the polyphase power distribution systems and the AC motor, with which he helped usher in the Second Industrial Revolution.
After his demonstration of wireless communication (radio) in 1894 and after being the victor in the "War of Currents", he was widely respected as one of the greatest electrical engineers who worked in America. Much of his early work pioneered modern electrical engineering and many of his discoveries were of groundbreaking importance. During this period, in the United States, Tesla's fame rivaled that of any other inventor or scientist in history or popular culture, but due to his eccentric personality and his seemingly unbelievable and sometimes bizarre claims about possible scientific and technological developments, Tesla was ultimately ostracized and regarded as a mad scientist. Never having put much focus on his finances, Tesla died impoverished at the age of 86.
The SI unit measuring magnetic flux density or magnetic induction (commonly known as the magnetic field "B"), the tesla, was named in his honor (at the Conférence Générale des Poids et Mesures, Paris, 1960), as well as the Tesla effect of wireless energy transfer to wirelessly power electronic devices which Tesla demonstrated on a low scale (lightbulbs) as early as 1893 and aspired to use for the intercontinental transmission of industrial energy levels in his unfinished Wardenclyffe Tower project.
Aside from his work on electromagnetism and electromechanical engineering, Tesla has contributed in varying degrees to the establishment of robotics, remote control, radar and computer science, and to the expansion of ballistics, nuclear physics, and theoretical physics. In 1943, the Supreme Court of the United States credited him as being the inventor of the radio. 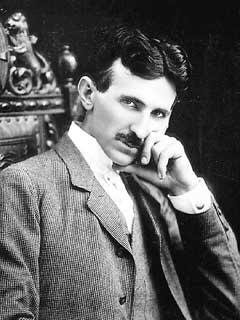 I would prefer the use of "mad", since he certainly was not mad.
He was, and still is, held in the highest respect.

I loved the way David Bowie portrayed him in The Prestige. I had become aware of his story in the 80's, thanks to a radio station producer, and a band of that name.